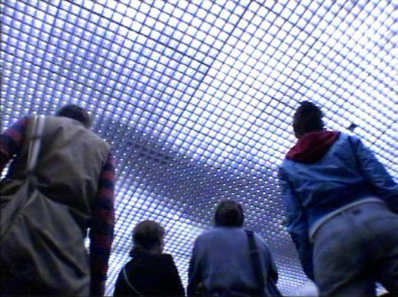 Algorithmically generated animations for an A/V-Performance inside a 5-sided, immersive LED-display space

The TROIA pixelroom is a modular, mobile architecture, containing wall-sized, immersive LED-panels covering the entire surface of all inside walls.

I conceived and programmed several algorithmically generated movies, that were shown during a series of live performances of the radio-play 'DEMONEN - Nicht-lethale Strategien' inside the pixelroom. As a further contribution to the project, I created a series of animations that were specifically designed to fit the properties of the 5-sided immersive display. Additional wearable multimedia devices, a positioning system and a walkable 5-sided pixel screen create a unique immersive space.

"TROIA is an experimental plattform: an intelligent room in public space, a mobile architecture transcending the conventional potentials of stages or art spaces."

"The mission is to generate public debate on homeland security systems and about 'technologies of political control ', such as non-lethal weapons, directed energy munitions ('DEMONS') and population-specific biotechnological agents. Therefore TROIA focuses on the next generation of crowd control, mass surveillance and prison technologies. (...) The starting point for the development of the project is a report, commisioned by the EU Parliament in Brussels, investigating the state of instruments of repression currently in use in Europe."

The TROIA project was initiated and operated by the machine-performance group BBM (Beobachter der Bediener von Maschinen 'Observers of Operators of Machines').